Last night I Skyped with Stephanie and Riley, and later, briefly, with Alex. Do you know that program? Skype is a program that you download to your computer and it allows you to talk, free of charge, to anyone else who has the program and is online at the same time. You can do a computer-to-computer phone call, video call, or instant message exchange.

I had a video call with Stephanie and Riley. Riley demonstrated her crawling skill, her new-found ability to pull herself up to a standing position at the coffee table, and then to walk around the table, holding onto it for balance. She also blew bubbles with her tongue, gave Stephanie big open mouthed baby kisses, played with a few toys, tried to push the laptop buttons on the computer she was in front of, modeled her new footed pajamas, and generally melted my heart with her little face. What a cutie!

I think back to the 80s when my children were little and we lived far away from family. We
sent photos and talked on the phone. We could even video, but that had to be physically mailed for the grandparents to view…no way to transmit by computer or internet in those days. What am I saying? We didn’t even have a computer until my son was a pre-schooler, and no one had internet. (Al Gore, we were waiting for you!)

I think about earlier eras when phones were not available. When Alex was deployed to Iraq a few years ago with the army, he was able to call us regularly, and send email. Now, his wife is deployed there, and he is stationed at Ft. Campbell, KY. They talk almost every day, free of charge, via Skype. No waiting for snail mail, although that is still useful for sending packages.  You can communicate with someone on the other side of the world in an instant now. Nothing like earlier times. I felt so fortunate when Alex was deployed, thinking of moms of soldiers from past times, who had to wait for a physical letter to arrive in the mail, and wonder if the sender was still safe and well on the other end, perhaps weeks after the letter had been mailed. Although it wasn’t easy to know that Alex was in a dangerous place, it was easier to have regular reassurance that he was well and whole.

And living in Alaska, I am reminded that many decades ago, generations back, when hearty pioneers and adventurers came here, they might never again see or communicate
with family left behind. Connectedness was much more tenuous and fragile long ago, and in frontier communities, life itself was fragile. I can’t imagine how it would feel to say goodbye to a son or brother, perhaps a husband, or, much less likely, a daughter, and never see them again because they were swallowed by the vast wilderness.

But happily today, the problem tends to be the opposite of long ago. Now some say we are too connected. We rely too heavily on electronic media to interact. And that can be true. People text each other rather than go to the next room to say something. Or they text rather than phone and actually speak to someone. Of course, there are times for all methods of communication. But although I value the ability to see and hear my family that lives far away through the magic of technology, I will continue to value face to face time more. The ability to Skype doesn’t replace the ability to touch. It is an improvement on still photos, and photos were an improvement on portraits or drawings. But I didn’t get any kisses from Riley last night; no electronic tool or program can replace the real thing.

So while I will continue to use and embrace technology and the convenience it offers, let me just say, for the record, that when it comes to babies, hugs and kisses are the best, and so far, there is no technology that allows for  sharing those across the miles. And actually, that’s true for others too…although Riley is an easier target for my kisses than my 23 year old son.

2 thoughts on “Hello to Riley” 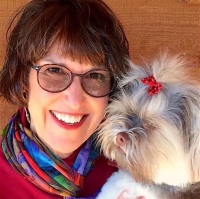 writes one short story every week